Topic: Another black Lishi Pick bites the dust with little or no pressure, Are Mr. Li picks better quality? 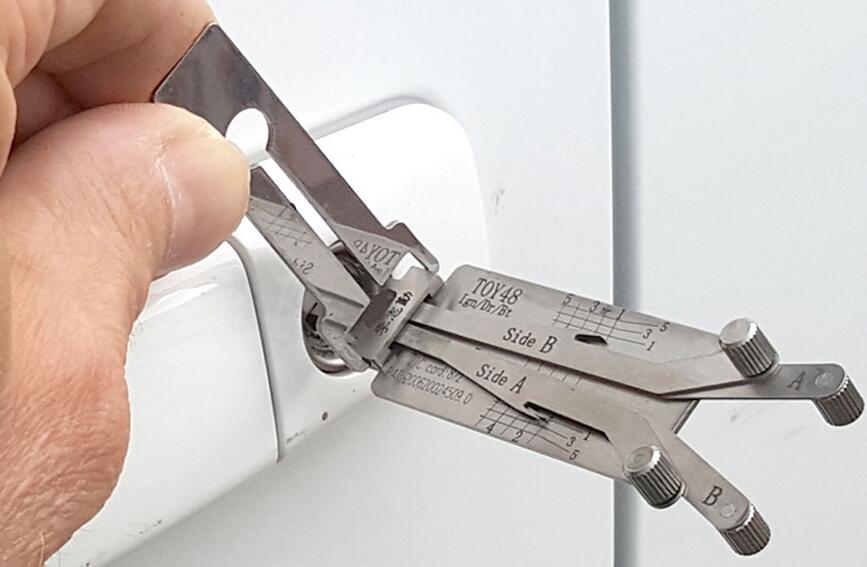 i was never a fan of the all black tools , they were originally made for a specific customer group , the process of blackening th the pick arms did make the pick tips on some brittle on some and not on others , they improve significantly when they kept the black bodies and reverted to the silver pick arms , these are far more robust than the full black tools with black pick arms.

i use both and have done development work for both , so would never advise one over the other , both do the job.

what i do know is the market is to blame for todays tool , the demand for mass production and cheaper tools especially cheaper tools is at the heart of quality issues , i remember when these tools were £125 plus vat each , and they were excellent and as lower demand were far higher quality , most of my original 1st generation tools are still in use daily on my van , anyone who believes they will get the same tool for £30 that was once £125 is misguided , of course corners get cut to bring the cheap price people demand , which is in my opinion a real shame , also a huge reason why development and new tools are few and far between now , as no profit in development . the saving grace is that 1 job pays for the tool so payback is quick , though a tool that is dearer and pays back many times over many years is a far better buy in my opinion and cheaper in the long term , though i guess with less actual tradesmen these days theres less demand for quality precision tools as cheap rules the day.

I’ve bought all my Lishi tools (around 50pcs now), some are clone, but most are original like advertised by seller.

The only lock i have problem (pick decode OK) but key cutted doesn’t turn is C4 2012 VA2T.

it makes no difference if the lock is VA2 or VA6 , the va2 should pick both , it just won’t decode the va6 lock , however if an older gen1 va2 tool it won’t get full insertion into some of the locks without a shoulder modification , good examples are berlingo and partner and ds3 , thus the gen2 va2 tool was made with the shoulder modification to get these too. but for picking it shouldn’t make a difference which tool is used , both will pick it but only the correct tool will decode it.

VA6 4 lifters, pick OK, decode not, wafers height are out the grid. Tried cut some blade, no one can complete enter inside the lock.

I also pick Ignition lock, decode with VA2, VA6 all the same code as door lock. Different with door is: All wafers need pick down.

The most important when working with any hands tools is experience.

It wasn’t the pick arms that broke Rapid it’s cage part at the tips they are very brittle and you would think the material used was a cheap die cast. I’d gladly pay the extra for a stronger tool.

I’ve also went for the likes of Mr.Li Vauxhall pick as it’s an 8 lifter on it rather than Lishi 10. If tool is a bit shorter hopefully it will be a bit stronger also a bit easier to use, decode etc as you haven’t got 9 & 10 to worry about. also ordered a VA2 hopefully it’s a 6 rather than an 8 as pictures weren’t great at time of order.

I can understand the extra 2 lifters as manufacturers are trying to cover as many models as possible but personally if picking a 6 cut I’d prefer a 6 lifter not an 8 or an 8 instead of a 10.

I’ve worked with tools before that go through the blackened process and there’s no doubt it can weaken them. Hopefully Mr.Li picks, at least on certain locks are made of stronger stuff.

if you bought the 10 cut HU100 tool then you purchased the wrong tool for vauxhall , although it will still pick the 8 cut the decode will be sloppy , the 10 cut is for usa and usa imports and is used on various models including the silverado , so the 8 cut is for vauxhall and the 10 cut is for chevrolet amongst others , you have bought the wrong tool if for vauxhall though the 10 cut has its uses on some ignitions. ok VA2 , the 8 cut was first made on the VA8 tool to be used on the later 8 cut toyota and 7 cut daf cf series vehicles , they were asked for a single lift version for picking the daf cf series and new toyota , thus they released the 8 cut va2 for this purpose , all va2 you will see on ic card 1049 will be 6 cut you wont see a va2 8 cut lock in uk, but the 8 cut tool will pick the daf cf series and the late toyota ignitions for which it was made for.
its a matter of you have selected or been sent the wrong tools.
for HU100 both manufacturers make the 8 and the 10 cut versions , even though with a bit of knowledge and understanding of the key series the 10 cut can still be picked and decoded with the 8 cut tool. but the point is both manufacturers make both tools for different locks.
same with VA2 , you needed to select the 6 cut tool and not the 8 cut tool at point of purchase as both really for different jobs.

Bought a dozen or so picks when first started out so starting to realize some distributors either don’t do they’re homework or don’t care as long as they sell the tool. Some give a list of models covered and some just a key number like HU83. Its only when you start using the picks you realize how inaccurate sales descriptions really are. For example the company I bought Vauxhall pick from only sold a 10 cut tool and listed all models covered so I thought at the time this must be the only tool for Vauxhall I see now how wrong I was and how in accurate the sales side is. Getting into it now like it when you manage to pick a lock reasonably quick and decode then the client thinks your some sort of magician and stands scratching their head as they’re pulling the cash out

they are not telling lies , the 10 cut will pick all the 8 cut locks too , you just need to take care decoding as pick must remain square throughout the decode or it miss reads.

i could say alot about both brands but i wont as not ethical i love them both , they were once 1 brand together for many years.

it can work both ways , you can buy the 8 cut then get called to a silverado import ( ive done 2 so far) and wish you had the 10 cut especially if ignition differs to the door , same with VA2 8 cut if you get called to open a daf cf series truck after 2013 you will wish you had the 8 cut , the first one i did was pre this tool being made , it took some head scratching , trial and error and patience to figure out how to defeat it with the 6 cut tool .
sods law is alive and well , you can almost guarantee if you dont have the tool then you will find yourself in the situation where you need it , may be murphys law over there.

i think following the last stock take i have near on 900 lishi tools over both manufacturers, many adapted by file to work differently , by far the best quality tools were the very first ones made in the early years when they worked together , i suspect these will still be working long after the newer ones have passed away.

they should never all pick down , is it same in ignition and door , all picking down ? if the case it sounds like someone has stripped the lock and replaced the wafers wrong or an aftermarket lock , on that year it should be va2 and not va6 , but you shopuld still have 4 wafers one side in positions 1245 and 2 wafers the other side in positions 3 and 6 . all of the cut to code machines will be cutting the key with the cuts as they should be , 4 1 side and 2 the other which will not work if all wafers are in same direction
what decode are you getting with the VA2 abcdef tool from bow to tip

these tools wer made to last and priced to allow for the quality they were , the tools were far better when they were as one before the split and when they were made for tradesmen rather than a mass market to cheapen them.

Thanks for their contribution.

Post: How to tell if the Lish lock pick tool is original or not.