XP is still a very useful OS, even now that its very old, its still the best system for a lot of things including cars. A lot of our favorite software and utilities still work best on XP. A lot of software for ”helping with activation” also works best on XP. Unfortunately a lot of newer computers which CAN run XP make it very difficult to install it.

Also, notebooks are a very useful type of computer. They have many good points which make them useful for car work.
-They are very small.
-They are hard to break, not impossible but harder than bigger things
-Sometimes they run directly from 12v
-They are cheap
-They combine new and old tech. You can buy a new notebook from China which will have solid state memory, a touch screen, a very long battery life just like a modern computer, BUT it will still have a 32bit processor. So it actually will run XP32.

However, as always, there are problems. A lot of netbooks and smaller notebooks have strange bioses, they have weird shit like flash memory directly on motherboard (not even in a removable module) and they often have strange OEM OSs which make it hard to install other OSs.

If you try to install XP on one of those, or any more modern computer you can have these problems:
-Just does not find the bootable drive with your XP install ISO
-Random bluescreen for no reason
-Bricks itself for no reason
-Says its installing but just ”installs” forever, gets stuck
-Does not accept any activation key even if its a working key*
-Says it cannot find a previous version of NT so cannot ”upgrade”*
-Says its missing User Licensing Agreement and cannot continue*
*These last 3 I believe are bugs in the XP installer

So, today I will be trying to do this with two computers. One is a Windows 7 machine which just refuses to install XP. Even if you take out the hard drive, use a drive caddy and install xp to the drive from another computer, it still bluescreens.
The second is a machine which came with some kind of OEM Linux type software and when trying to install XP it bricked.

So the software that we will need to download is:
-A Windows XP ISO
-A Windows FLP ISO
-A live distro of a linux called ChaletOS
-Rufus

You can find all these things for free online. They are easy to find. Because those windowses are so old now they and their activation codes are freely available.

You also need another working computer to prepare the USB sticks.

So here we have todays victims:
-The win7 machine 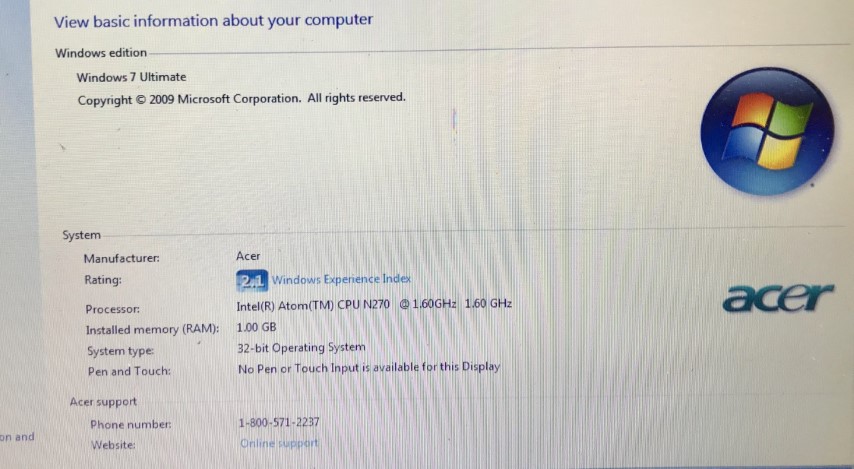 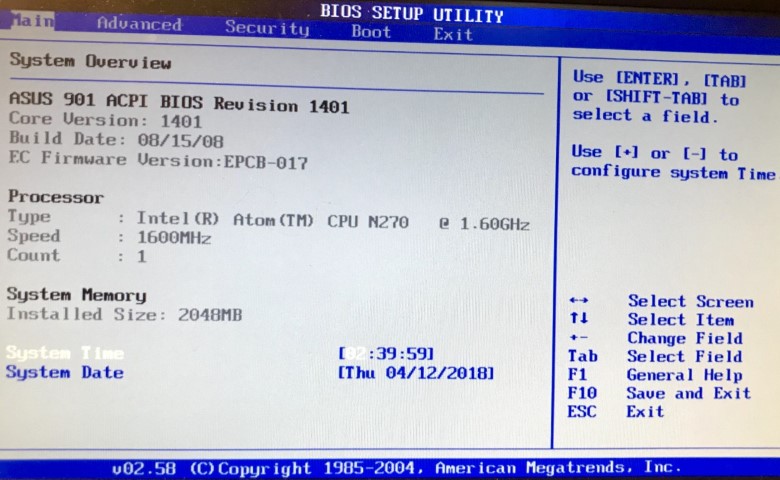 Because these computers only have USB drives, we have to write bootable USB stick with Rufus. I used 3 random old usb sticks from the thrift store! 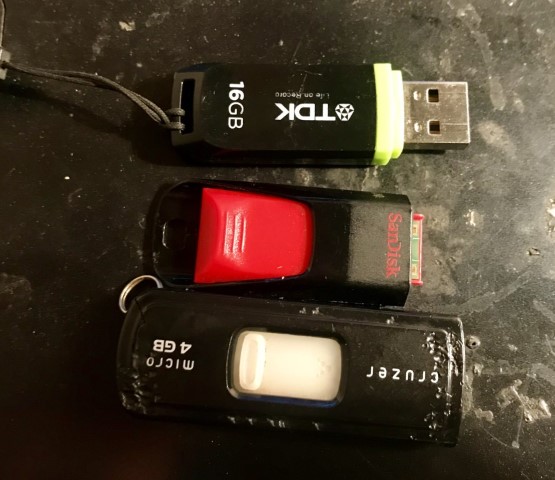 Using Rufus is really easy. It takes a few mins and the stick is done. In this photo its actually showing burning the FLP image, but the first one to burn is ChaletOS 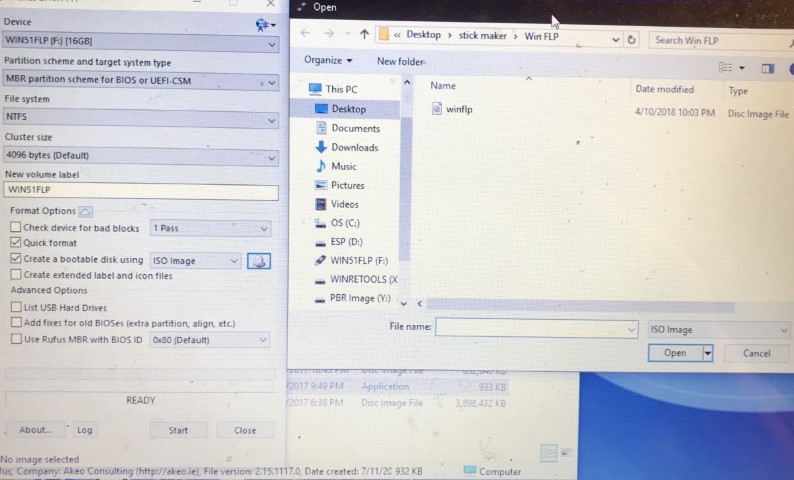 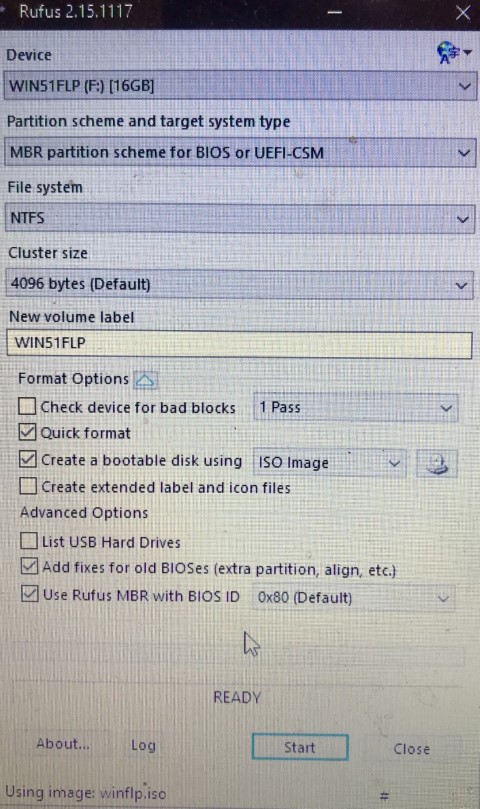 ChaletOS is a Linux which is pretty easy to work with for people who are used to Windows. I dont really understand Linux so I used Chalet because its easy to understand. I also prefer to use it instead of other drive formatting tools because its very easy and there is no command-line or any other headaches. Good for dumb people like me.

Once the Chalet USB stick is ready, I put it into one of the computers and turned it on. I pressed the F2 key to get the BIOS menu. Every one is a little bit different, but basically there are two things to do here. If there is a choice, switch from AHCI to IDE. Also, make the USB stick the top of the booting list. Sometimes, for some reason, the computer refuses to boot from the USB stick. In this case, I went to the hard drive section of the BIOS menu and disabled the computers own hard drive/s. That will force it to boot from the USB stick. Save and restart and it will boot into ChaletOS.

ChaletOS is a live OS so it will run from the USB stick without using the hard drive. A computer with no drive at all can use it.

Once Chalet is started, it will look kinda like Windows, at least it has a My Computer with various drives. 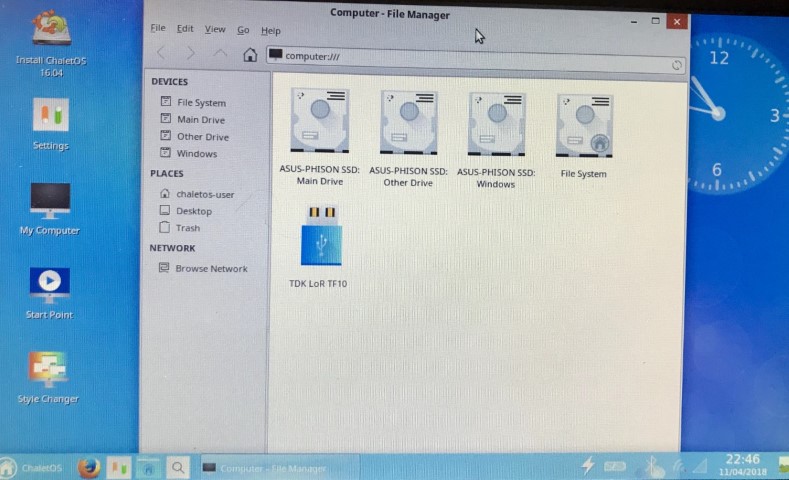 The USB stick and the ”file system” drive are from ChaletOS, and the other drives (there are two here) are the old Windows drives.
You can literally delete the contents of the hard drive/s. 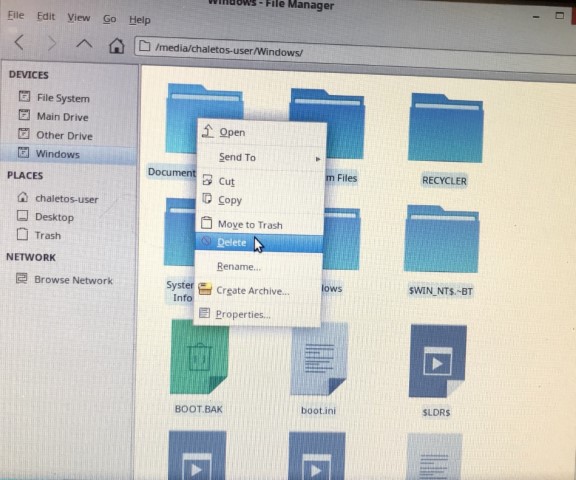 Unlike deleting files with a Windows based utility, this will delete EVERYTHING, including Windowses own boot files which is what we are trying to get rid of. Now the hard drive is totally empty. Shut down, and you will have a empty computer. However unfortunately its not as simple as installing XP now, because it will still probably have problems.

The next step is to use Rufus to burn a copy of Windows FLP. So FLP is a strange system. Its kind of like XP, but newer, but for old computers. I guess its kind of a ”xp lite” but made way after XP was made. I guess its so that you can still have a XP style system on very old computers in places like schools where they don’t want to throw away old computers.
FLP has one huge advantage, because its newer than XP, it will install on almost anything. There are no bugs, no errors, no missing EULA bugs, etc etc. It just works.

So boot from the FLP stick and it will begin setup. 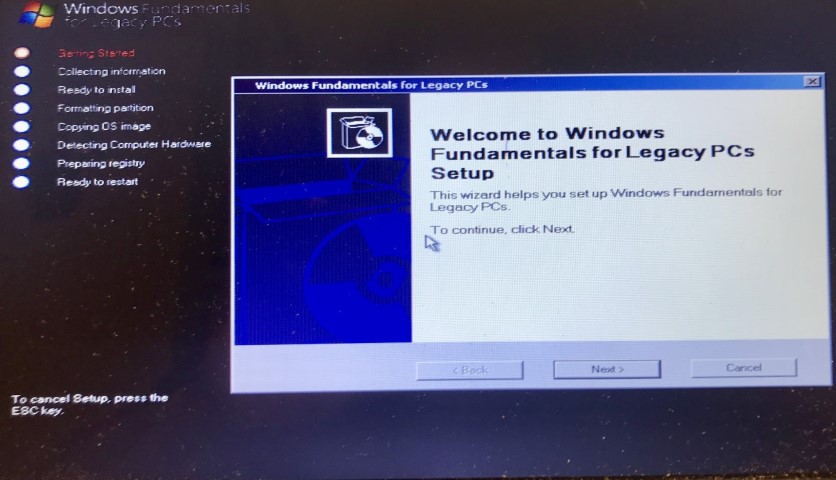 Serial keys for FLP are free, this one works 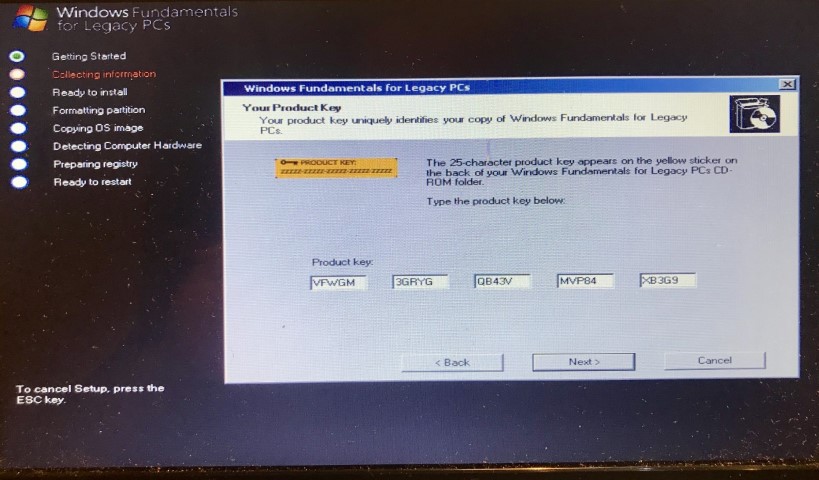 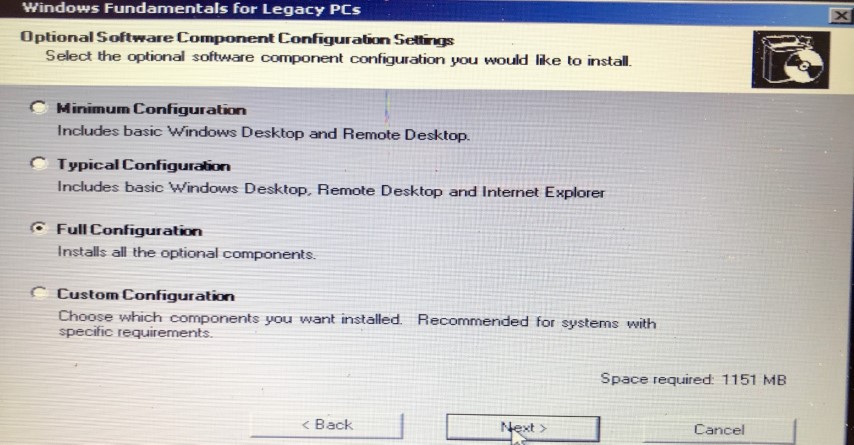 I like to delete all the partitions and start again. Make however many partitions you want and install FLP on the one you want to eventually use for XP. 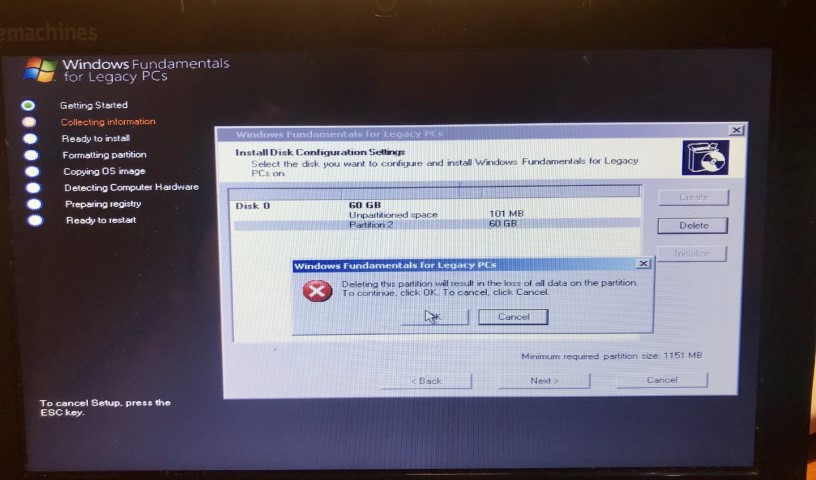 It will install for a while. The computer will turn off and on a few times, it will force you to choose a username/password (you cannot start FLP with no password), and then the First Boot utility will do some more shit and turn the computer off a few more times, but in the end, you will have WinFLP on your computer. Congratulations. That’s ALMOST XP!
Both of my computers successfully installed FLP 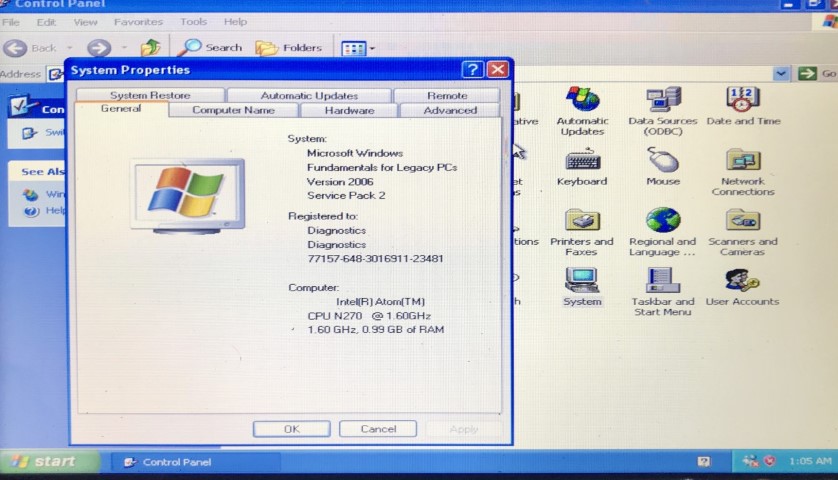 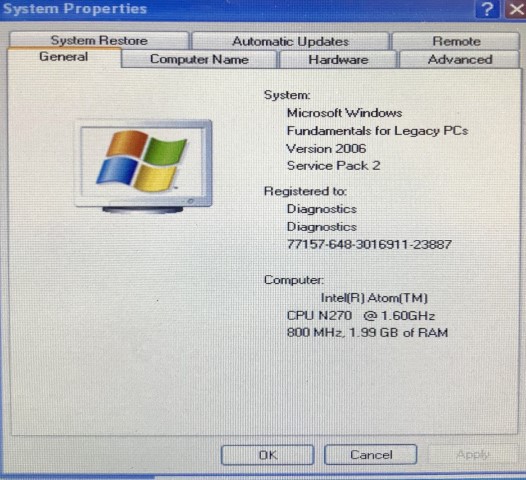 So the next step is to use Rufus to burn a stick with actual normal WinXP. I used XP Pro SP2.

So the trick here is to start the computer in FLP and then run the Windows setup from the stick. Don’t turn the computer off and try to boot from the WinXP stick, because all the same problems will happen. You have to run it from FLP. Just go to My Computer, find your WinXP stick (the computer will probably think it’s a CD) and click on Setup. 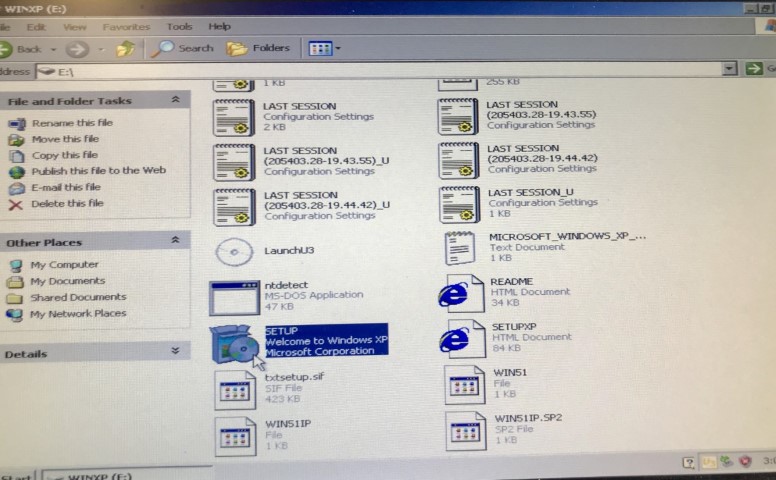 FLP is strange because its made after XP, however the normal XP installer recognizes it as being an older version than XPsp2. So, despite the fact that in theory you are not installing a newer system but a older system, WinXP installer will still give you the option to ”upgrade” to XP from FLP. This is what you want to choose.

After that, WinXP setup will run as normal. No errors, no bugs. 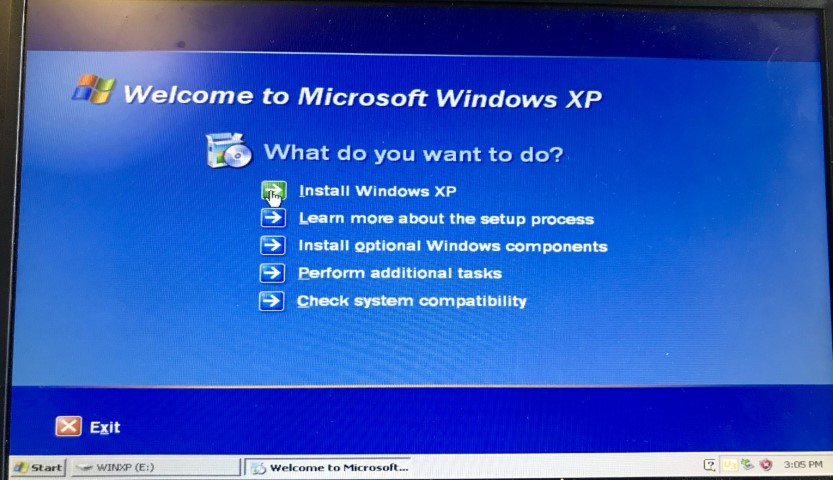 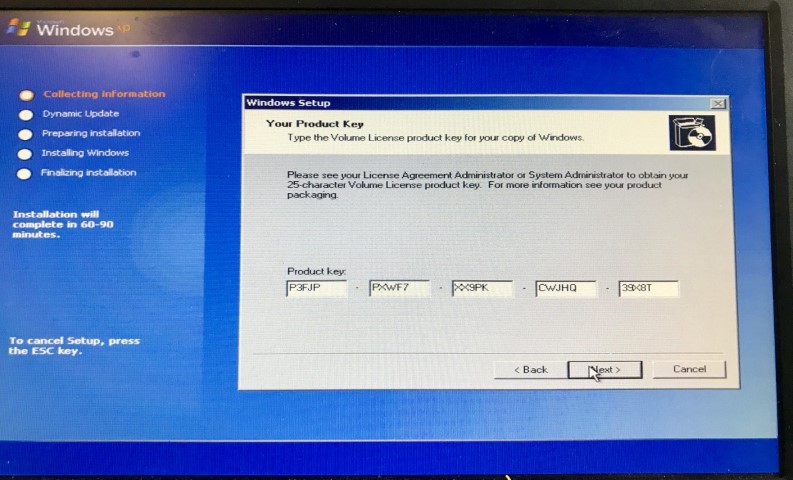 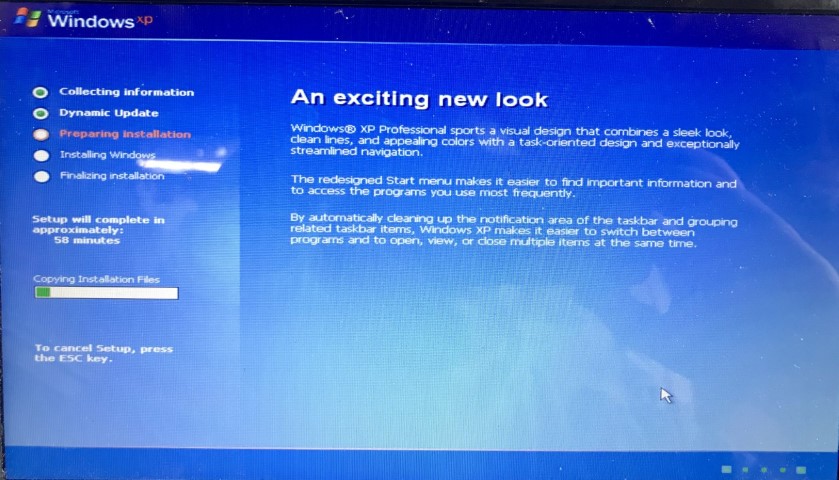 So, after all that, congratulations. You have real working XP on a computer which everybody thought was impossible to install XP on! Now you can do all the things you needed XP for!
For some reason, the version of Windows appears as XP Embedded. I am not sure if that’s a bug or what, because in theory Embedded cannot run on a PC, only on smart terminals and modules and stuff? I actually don’t know. But, either way, despite the fact that it says that, you now have a fully functional working XP SP2! 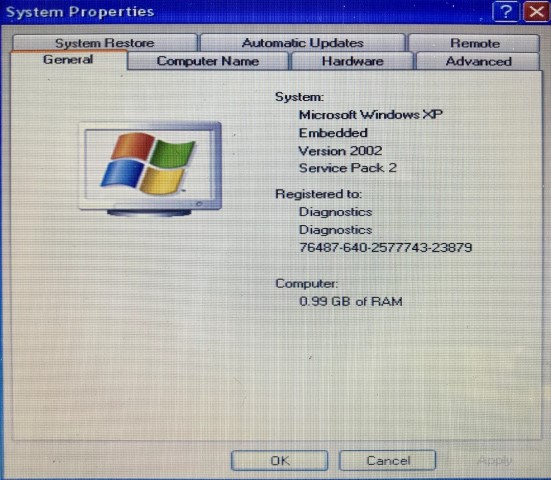 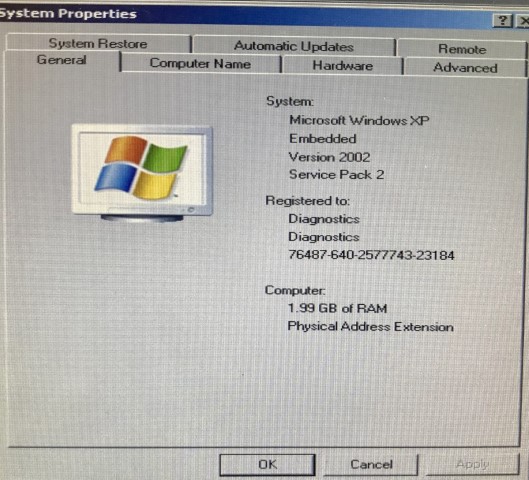 So, there you go. My method for ”difficult” XP installs.

Hope this helped somebody.