I have Chevrolet Corvette, looking for a scan tool that doesn’t break the bank that will help to determine why I get no crank and some other seemingly related issues.

The year of engine / PCM:

The entire project is a transplant of a running and driving 2014 Camaro SS A8 into a 70 Chevelle Malibu. The only things I gave up were the ABS, seat belts, airbags, sunroof and HUD. All the original parts and harnesses, except the door latches and lights.

What I tried to do:

I got my cheap vxdiag gm scanner to give me some codes and I now may know what is happening. The shop foreman at a local dealership told me that the absence of the fuel pump from the wiring harness (and therefore the CAN bus) wouldn’t cause a no crank condition. However, the codes only talk about the CAN bus failing and the fuel pump response and so now I suspect that the absence of the pump is the cause of no crank cause, or at least it’s contributing to the issue.

The reason the fuel pump and tank are not installed is that I was waiting until I was ready to actually start the engine. The wiring harness for the fuel pump/tank was cut and an 8′ section was crimped, soldered and heat shrunk into the area under the back seat; that was where the harness went through the floor which was close to the Camaro tank.

Although I verified the splices, twice, my concern was that I didn’t want to test the new wiring with gas in the tank and I thought that sooner or later I would plug the pump in without the tank; I guess the time is now. We’ll see if the codes change – maybe tomorrow.

BTW, if you run your pump without gas in the tank or hanging from the rear end, be sure to only let it run for a few seconds. It actually uses the fuel as a lubricant.

I would just like the ECM to talk to the OBD2 scanner and fire up the starter motor. The rest of it will come later. I plugged in an OBD2 scanner and all I could get was “ECM (or is it ECU) not responding”. I assume that means the BCM is responding. But I don’t know for sure since the BCM is compartmentalized; some of the BCM stuff does work, like the exterior lights, radio and NAV. Since I know that some of the BCM stuff is not working I suspect that I may have a missing ground under the dash cover. Don’t look forward to taking that all apart. Couple of pics of the current state of the dash below.
Have checked every fuse Might be time to unplug all the cables and check for bent pins. 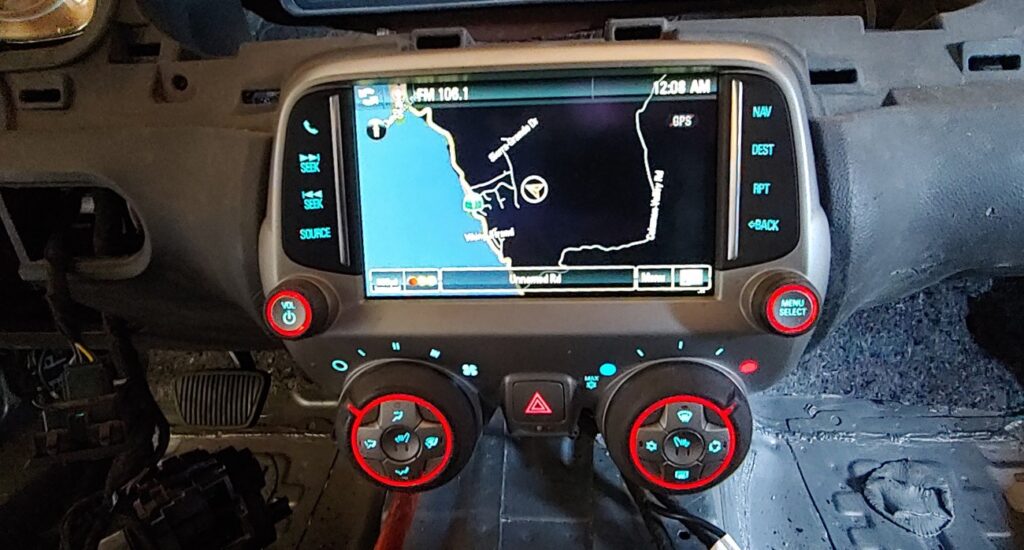 I’ve isolated the problem to the GMlan/CAN bus and found an open in the circuit; I can see both 120 ohm resistors but only from two different points in the circuit. From contacts 6 & 14 on the odb2 connector, you should read 2 120 ohm resistors in parallel or 60 ohm; I only see the one resistor at the end of the line, the one at Fuel Pump Control Module when connected to the ODB2 pins.

From pins 14 and 26 on the ECBM, I can see the one built into the ECM, but only from the Electronic Brake Control Module (EBCM). On ECBM pins 15 and 27 I see 20 ohms which is very confusing.

Continuity thru the FPCM and EBCM is solid. This is a requirement for testing; when the circuit is dry (battery disconnected) you need to be able to test the circuit.

The attached drawing with its notes is originally one I found on LS1tech or on Camaro5, and I’m not absolutely sure it’s for a late model gen5, but it is an update from the early gen5 drawing. My notes are from my testing.

I could not find two of the modules the drawing shows – Headlamp Leveling Control Module (believe this vehicle didn’t have it – see TR6/TR7) and the Automatic Transmission Assembly. 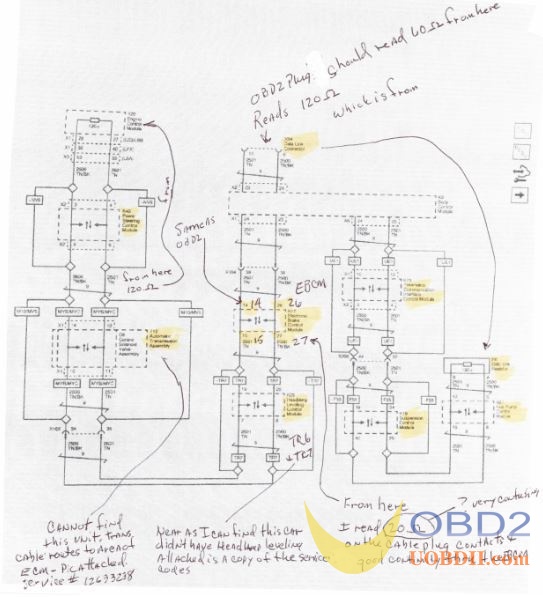 Tech II clone, and if you have a laptop, then this will fit the bill.

Hence is a MDI clone that comes with Tech2win, and works just like the same tool that the dealers use. Better yet, since it is a MDI clone, will work not only on older GM cars, but the latest GM cars as well. Hence C6 and older vets uses Tech2win software. while the c7 and up cars us GDS2 instead (which is comes with both /will run both as well.

I have both vxdiag vcx nano gm wifi version and vxdiag vcx nano gm usb version, and the glitch with the Wifi version, is you have to have it connect to the car and car on for it to power up.
So every time you turn the car off, then back on, you have to go back and restart Tech2win to reconnect the nano to Tech II software.
Also, I like to have the Nano connected to Tech2win before connecting the the car, So when I use the Wifi unit, just use it USB cable style to solve the connect/reconnect problems.

To add, when using the nano with Tis2000 and even TDS, need the laptop to stay wifi connected to the internet, and not an easy way to pull off by connecting to wifi Nano and the Wifi internet at the same time on most machines.