I have the dread light on my 2005 Mercedes-Benz E-Class E320 RWD CDI 4dr Sedan (3.2L 6cyl turbo diesel 5A). I had the fault diagnosed by MB SD Connect Compact 4 and located the fault at the occupy sensor in the passenger seat. I took t to the dealer ship but was charged $1000 to get the problem solved. That’s too pricey. Thus I found myself a Benz seat occupancy sensor emulator at www.uobdii.com.
I have to mention that there are lots of occupancy sensor emulators on the aftermarket. Prices are varying from dealer to dealer. But have to check whether it can do your car or not because I learned myself from Benz forum that some one get the wrong emulator but cannot work. My emulator fits older Benz models (appx 1997-2005) and takes $30 (actually $30).
The emulator was easy to install. But different Benz model may install slightly different.
First of all, Move passenger seat all the way forward and tilt backrest to access to underside of seat assy
Then connect the emulator. Thanks Eobd2 engineer who display clearly what vehicle model can it cover and how to connect emulator for different models. I would like to quote their hard work as a part of reference.
Mercedes Benz SRS A
– E-class W211 (2002-2004 year) with controller airbag Temic,
– S-class W220 (2003-2005 year)
With installed child restraint
Sold the A terminals together for Mercedes Benz SRS A, as shown in the picture 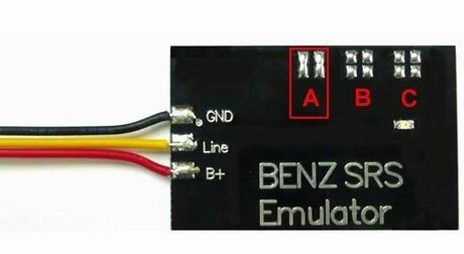 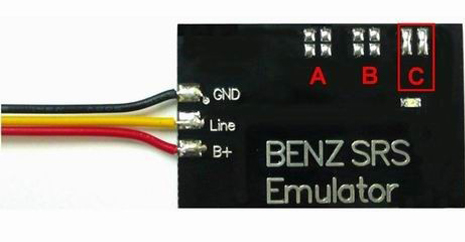 After that, plug the emulator under the passenger seat instead of seat occupancy sensor.
Finally, turn car key to position 2. The SRS light should come on then go out
The job’s done!!!