I bought F30 335xi with engine broken.
To fix car I decided to replace engine. I bought a new engine with all equipment (including DME) from “Authorized BMW disassembling facility” and everything is mounted in the car. Only gearbox from old engine was mounted to the new engine. The engine is pretty new with only 7km on dash.
The DME from old engine:

The DME from new engine:

Both DME looks exactly the same, but numbers on them are different.
Now I want to start the car.
I connected to the car with Rheingold and received few errors from DME:
1F2108 DME, incorrect data record: Variant monitoring
1F2601 DME, encoding: Missing
1F2604 DME, encoding: Vehicle identification number wrong

Ps. 1F2108 DME, incorrect data record: Variant monitoring in details:
Fault description:
The diagnosis monitors the software variants between CAS and DME.
Fault monitoring conditions: The fault is detected whenever the software variants fail to match one another.
Action in service: Continue troubleshooting at following control unit:
-CAS.
-Reprogram and encode the DME.

With the situation above, i was confused to do anything. Then post a thread on a forum. People answered me as follows. Put questions and answers here, hope they will help someone out also.

How to align the DME to the car ?

Use abritus and istap.
Is the error “1F2108 DME” mean that I need to flash DME ?
You must reencode DME with E-sys and if car still not start you must move ISN data from old ecu and do sync with ISTA/D.

you will need to buy ECU explorer not BMW explorer

I heard that when there is sync issue the engine will not try to start.

When I try to start the car the engine cranks.
Is this means that sync between DME an CAS is not the issue ?

In Esys I noticed that DME lack of CAFD. Is this could cause the engine to not starting ?

In esys click on “DME2 [12]” than click on “Detect CAF…” than choose CAF file and code DME, but you will still have to synch ISN number CAS-DME to start engine. 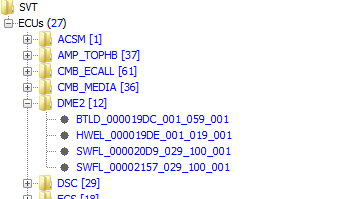 Several modules with your ISN and VIN must match up internally to start the car, you may be able to get the trans into neutral and power to the ignition to crank, but if you don’t have the EKPS (electronic fuel pump module in F3X, idk the F10 equivalent) matching up with the DME and the gearbox module the fuel will never flow and then you can crank all day but never start because the fuel pump is disabled.

Is it possible to code the old DME for controlling turbo by wire ?

It sounds like you are trying to convert a PWG car to EWG. The 2 are incompatible and I have not found any instance of anyone being successful with such a swap yet. Your case is different since your changing so many components but it has not been done yet to my knowledge.

How the type (PWG and EWG) is represented in FA??

It is not compatible for original and replaced DME

1: You have to read out DME VIN from replaced engine. Use BMW explore or ECU explore to change VIN and sync DME_-CAS.

BTW you must use replaced engine wire harness and all parts.